This story of NBA player JaVale McGee pretending to have bought a pet platypus (two of them, actually, but I don’t know the plural for platypus) is pretty amazing. The gist is that he was tired of the way the media was treating him, so he Tweeted saying he had “just copped a pet platypus” and then posted a picture forty minutes later of two hands holding a platypus duo (like how I’m avoiding that word?). Grantland explains what happened next:

After alerting the world of his new “pets,” JaVale went on with his evening and following morning, but the MEDIA did not. Stories were written about JaVale, talking about his odd acquisitions that he apparently just copped. Articles by “reporters” and “journalists” claimed that, in classic JaVale fashion, he had made an interesting platypus investment, but the “reporters” and “journalists” who wrote these stories never consulted the platypus buyer in question.

The next day he called them out for not having called or even Googled (it’s the top image result). Good on JaVale McGee.

Here’s the image in question: 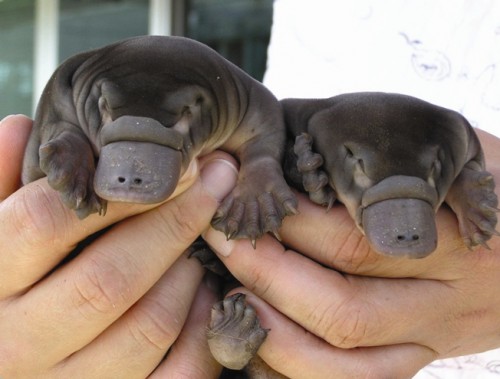