I’m still hard at work on writing up Conway’s Law, so sharing something I wrote a few months ago that I haven’t posted yet. If you are following along, I’m working on a book about the frameworks we all use to understand the world and these are some drafts of the work. I appreciate any feedback and hope you’ll subscribe by email if you haven’t. Thanks for reading.

Most people know the Pareto principle by it’s more common name, “the 80/20 rule.” It’s story starts in the late-1800s with the Italian economist Vilfredo Pareto. Responsible for a number of economic breakthroughs, Pareto became particularly interested in the distribution of income. After collecting wealth and tax data from a variety of countries, he noticed a consistent pattern in the distribution. Originally outlined in his first major work, Cours d’Économie Politique1, Pareto had discovered that across countries 20 percent of the population seemed to control around 80 percent of the income. 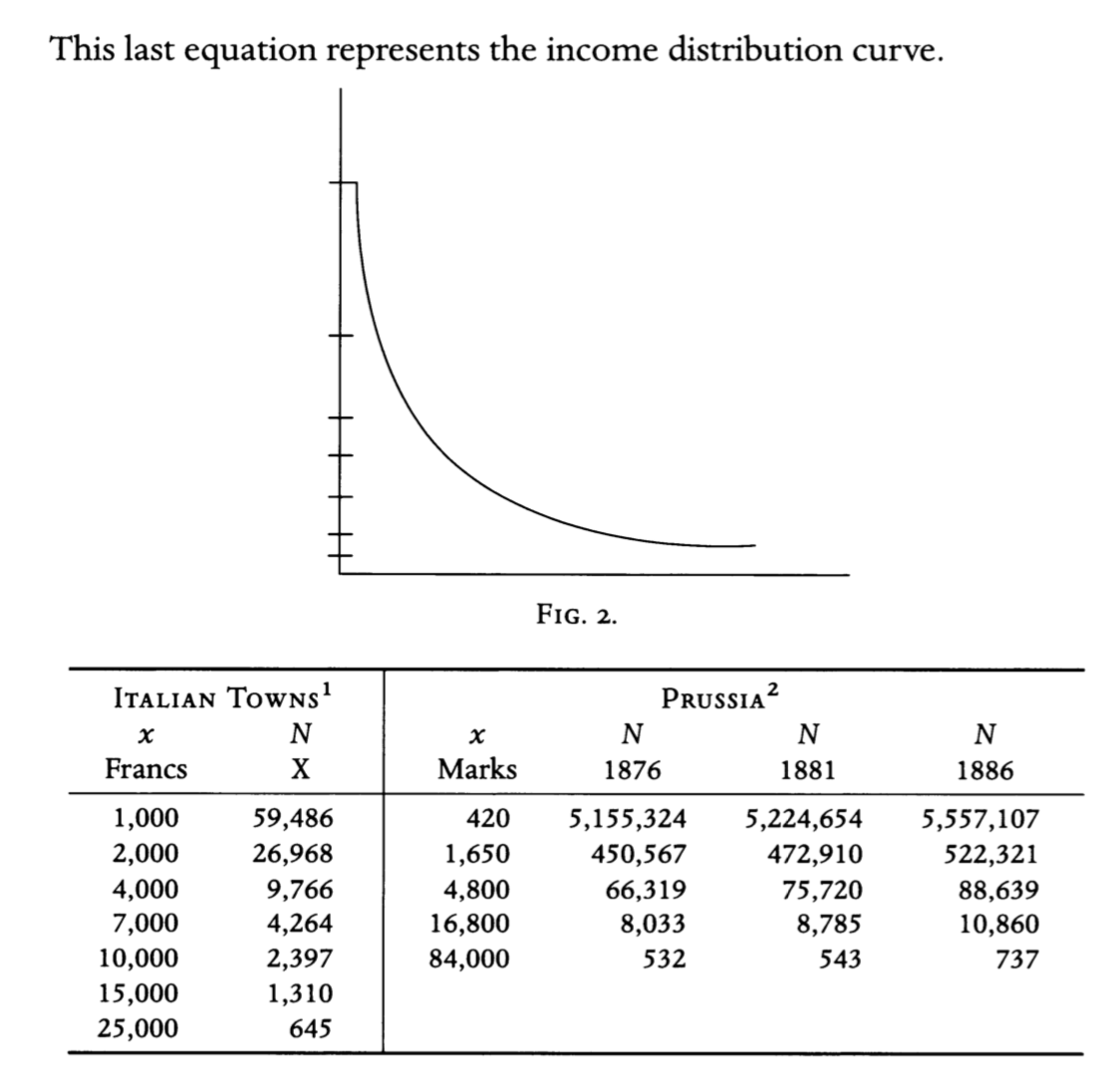 Source: “The Curve of the Distribution of Wealth.” History of Economic Ideas 17.1 (Translation: 2009)

Although he had uncovered the phenomena, Pareto wasn’t sure why it existed:2

It is not easy to understand a priori how and why this should happen. As I said in my Cours, it seems to me probable that the income curve is in some way dependent on the law of the distribution of the mental and physiological qualities of a certain number of individuals. If such is really the case, we can catch a glimpse of the reason why approximately the same law is to be found in the most varied manifestations of human activity. But, instead of seeing those phenomena only in dim outlines, we would like to perceive them clearly and precisely, and up till now I have not succeeded in doing so.

The specifics of 80 and 20 aren’t critical, the point is that a small portion of a specific population tends to account for a large portion of some other resource. As time has gone on we’ve found evidence for Pareto’s discovery in more and more systems: Just a few scientific papers grab most of the citations, a small portion of a company’s customers tend be responsible for large percent of its profits, a tiny number of users tends to make up the vast majority of the customer service requests, and a “vital few” factory defects account for the bulk of the production issues.

It’s that last one about factories that we have to thank for the popularity of the Pareto principle. Quality control pioneer (and catchy name-coiner) Joseph Juran explains:

Juran went on to become an important management thinker and the Pareto principle spread through industry and the broader world.3 At this point the 80/20 rule has become a basic and helpful mental model that many managers understand.

But we still haven’t answered Pareto’s original question: What it is about human nature that causes this massive imbalance to continually emerge in such a variety of systems? To answer that we turn to Albert-László Barabási and his study of networks. As the web was emerging, Barabási and his colleagues were busy analyzing the new and rich datasets it generated. Every time they dug in, the same odd pattern emerged.

In one of their studies, the team set up a crawler to look at how different web pages linked to each other. Expecting to see a bell curve, they instead spotted something very different: “the network our robot brought back from its journey had many nodes with a few links only, and a few hubs with an extraordinarily large number of links.” Barabási continues, “The biggest surprise came when we tried to fit the histogram of the node connectivity on a so-called log-log plot. The fit told us that the distribution of links on various Webpages precisely follows a mathematical expression called a power law.”

What made this discovery so important was that power laws are a signal that you’re not working with random data. If you chart random (or more precisely disconnected) data points, like the heights of people in your town or the scores of students on a test, you see a bell curve distribution. However, if you chart non-random interdependent data points you get the power curve that Barabási kept seeing:

Power laws rarely emerge in systems completely dominated by a roll of the dice. Physicists have learned that most often they signal a transition from disorder to order. Thus the power laws we spotted on the Web indicated, for the first time in precise mathematical terms, that real networks are far from random. Complex networks finally started to speak to us in a language that scientists trained in self-organization and complexity could finally understand. They spoke of order and emerging behavior. We just needed to listen carefully.

So we come full-circle back to Pareto, who once explained that, “The molecules in the social system are interdependent in space and in time. Their interdependence in space becomes apparent in the mutual relations that subsist between social phenomena.” The 80/20 rule is present in systems where there are self-organizing interdependent parts and its subject to the same cumulative advantage mechanics we saw with popular music. That’s why the pattern emerges so often in companies and markets: It means a huge number of forces are pushing and, critically, reacting to each other at the same time.

As should be reasonably obvious, the 80/20 rule has a number of important effects and implications for everyday business and life (many of which will come up in other models). First, understanding when you’re working in a system susceptible to the Pareto principle is critical. Once understood, being able to accurately isolate the 20 percent and find ways to make it less interdependent can fundamentally alter the balance of the equation. One of the simplest conclusions to be drawn from the 80/20 rule is that sometimes you need to fire a customer or an employee who is responsible for eating up the majority of your resources, as painful as that choice may be.