Sorry about the quietness, I was in San Francisco for the last few days. Once I finish catching up with everything I should be back on a regular posting schedule.

Until then, here’s something for your viewing pleasure. Team Tiger Awesome presents: 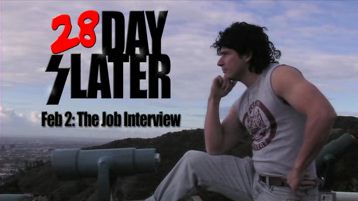 As a special treat (or whatever you want to call it), I did a quick interview with Nick Mundy, Chief Awesomeness Officer of Team Tiger Awesome. Their newest video, 28 Day Slater, just made prime-time on Channel102.net. For anyone around the NYC area, the screening of next month’s episode is on April 24 at the Magnet Theatre.

Noah: Why Slater? Why now?

Nick Mundy: Slater is not just a person, he is an ideal. If you werent a blond haired guy with three names or you hit puperty before 18, you wanted to be Slater in high school and junior high. Plus, Derek looked just like him, and we were too lazy to think of anything else.

Noah: And if you were blond I assume you wanted to be Zach?

Nick Mundy: No i might be Jeff, the guy who stole Kelly from Zach… man, that is some good time.

Noah: Who would win in a fight between Slater and Ryan from the OC?

Noah: Give me the results of both bouts.

Nick Mundy: Would Ryan be willing to wear spandex?

Noah: On an awesomeness scale of 1 to 10 what would you give Slater?

Nick Mundy: I would give him the ranking of Slater.

Noah: Are there any other television characters on the awesomeness scale? Have you ever considered renaming it the slater scale?

Noah: Is it possible that there’s a correlation between awesomness and hair products?

Nick Mundy: No, but if you have the awesomeness, chances are your hair is awesome. It’s in the bible.

Noah: Do you think Slater ever read Shakespeare in high school?

Nick Mundy: I think there was an episode about that and he got dressed up, then Zach got mad. I have a feeling hijinx ensued.

Noah: How is it that one high school was so full of hijinx?

Nick Mundy: I think every high school has it, just some have louder laugh tracks then others?

Noah: Describe the episode in 7 words.

Nick Mundy: Is he Mario Lopez? Or AC Slater? Can I have a 8th word?

Noah: Where did Slater draw his power?

Nick Mundy: The children of america and Brandon Tartikoff.

Noah: One more question, is there a more ridiculous last name than Turtle?

Nick Mundy: Yes, S. E. Hinton. Get off your lazy ass and write me a fucking Outsiders sequel, christ.

Nick Mundy: Visit TeamTigerAwesome.com to watch 28 Day Slater and our other shorts and episodes, i think youll like them… oh yeah, ASTROS In the ’06.

Noah: Are your last words really going to be a shameless plug?

Nick Mundy: Are you going to do that for me anyway?

I think Nick said it all, check out the video at Team Tiger Awesome.