I’ve been doing a lot of reading (and thus thinking) lately. What follows will hopefully hang together, but it may very well turn into a bunch of random ideas. So goest the dangers of blogging.

Okay . . . let’s begin with something Adrian wrote a few days ago about the digital divide: “I now often get the sense that the real digital divide is not so much around fluency or access to technology. Instead it is around ways of thinking and ways of seeing the world.” This is something I’ve been trying to articulate (hopefully effectively) for some time. Digital is not just the underpinnings of new technology, it is also a change in how the world operates.

Two simple examples: Scarcity goes away with losslessness and complete control goes away with the multiple entrances and exits digital technology can provide (think fast-forward and rewind on the tape player versus skip on the cd . . . or even better, just choosing a song in iTunes). What comes out of these is a shift (that I would call postmodern). Here’s some more from Adrian’s post (who I hope won’t mind me reposting this graphic without permission). 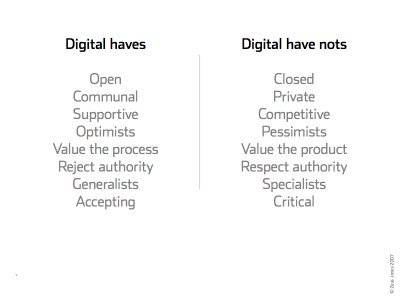 What these leaves us with is a world where we need to reassess how things work. Traditional business and economic drivers (such as scarcity) don’t really work any more. Or, as Terry Heaton wrote, (quoting Ian Rogers), “Losers wish for scarcity, winners leverage scale.” I love Pixel Qi as an example of this. As I wrote last week, “Pixel Qi … is a spinoff from OLPC that hopes to sell the technology developed for the OLPC in a for-profit way, thereby helping the OLPC (and other firms) get the scale they need to lower the prices on the laptops. Basically: The more customers Pixel Qi gets, the cheaper kids around the world can get their hands on this technology.”

It’s almost laughable to think about that strategy in the face of OLPC’s whining about competition (yes, I know, much of it is fair complaints about unfair competition). Another great example of this is Google’s killing of domain tasting. I think Umair’s words about Google also work for the OLPC (although they haven’t chosen this path): By selling the technology and allowing more competition the ecosystem flourishes and “everyone is better off in the long run.” In other words, openness leads to higher returns for everyone and better products for the people.

Now for a slight diversion (since I’m not quite sure how it ties together yet).

In this new landscape everyone is competing with everyone. We see this in the media environment now, where “there are lots and lots of non-commercial alternatives that are free and quite good.” Just take the advertising landscape. As Terry Heaton wrote in his latest essay, what’s so interesting about this new media world is that advertisers are now competition (and that competition will only increase). Advertisers everywhere are creating sites with content and games that rival what you can find on the rest of the web because they realize that’s what they have to do. This is dangerous for media companies because advertisers have a completely different revenue stream than they do and is once again a case of fighting the crazy guy in the room who has nothing to lose (at least not in the media space). Throw in bloggers and the rest of the layfolks who are media owners with an entirely non-monetary revenue stream and you’ve got a recipe who knows what.

The question I have then, is what happens next. If we play this out to its conclusion and assume that what we are seeing in the media world will manifest itself everywhere what happens?