I’ve set a reasonably modest goal for myself of writing 10 blog posts in April. Let’s see if I can get back on this bike (since I really miss it). This is post number 2.

I’ve been enjoying Julia Galef‘s Rationally Speaking podcast a lot recently. The cybersecurity episode was great, just listening to the episode on whether ideas are becoming harder to find, and I can’t resist a good Fermi Paradox conversation.

If you’re not familiar with the Fermi Paradox I would start with the excellent Wait But Why explainer. The gist of it, though, isn’t really a paradox so much as a question: “Where is everybody?” Specifically, why haven’t we encountered aliens yet? One of the more popular explanations is called the Great Filter and basically posits that either it’s incredibly rare to reach mass intelligence like humans have, we’re just the first to do it, or that we’re all about to kill each other any day now and that explains why we haven’t heard from any other space civilization. As usual, Wait But Why has a handy graphic. 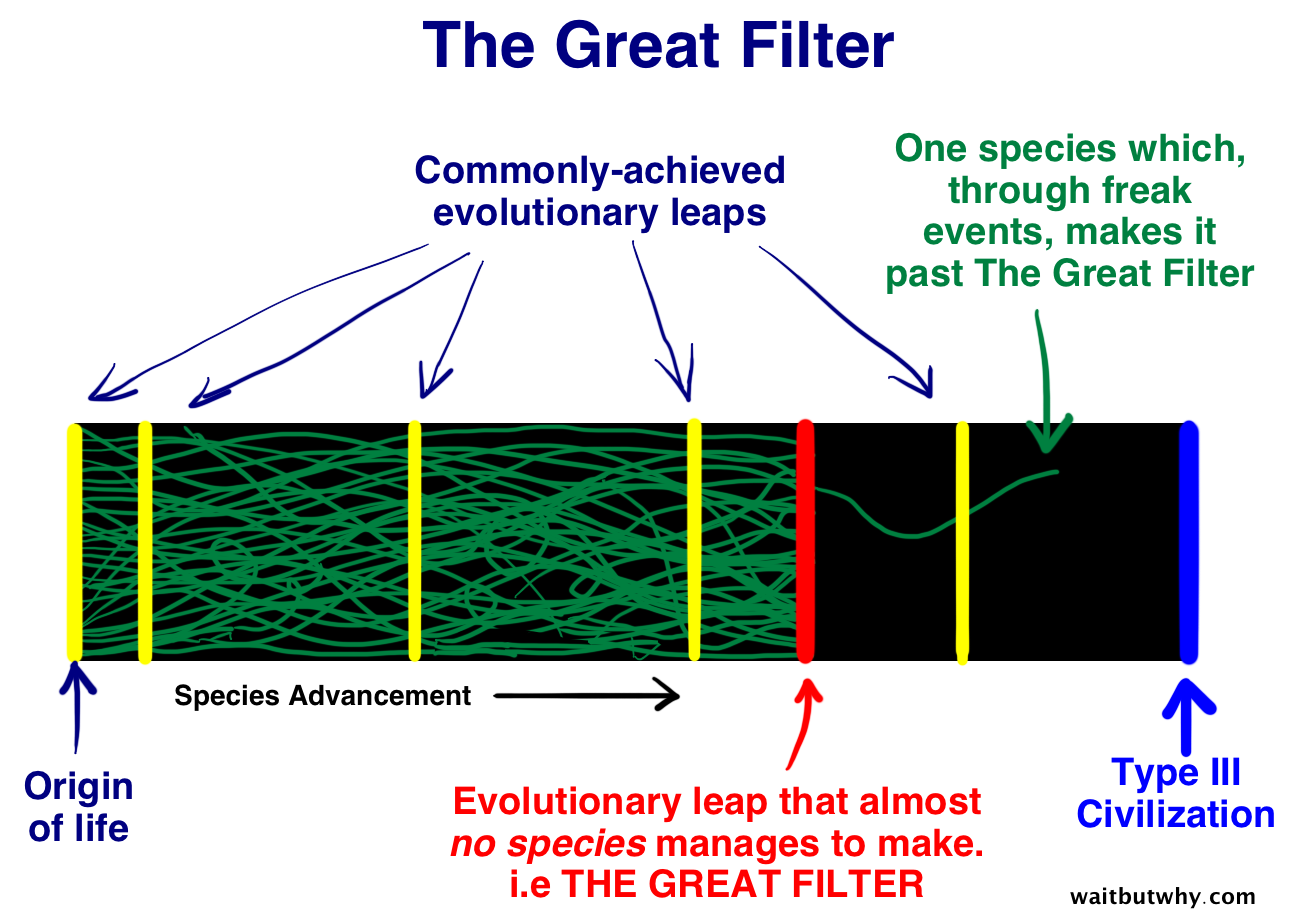 In the Fermi episode of Rationally Speaking Julia Galef makes a really interesting point I hadn’t read/considered before:

Stephen Webb, who she’s interviewing, responds with this:

Well, I’m not arguing necessarily that the barrier is there, but if you look at Earth, of the 50 billion species or however many there have been, there’s only one species that is remotely capable of delivering a starfaring civilization, and that would be us. I think that’s because we have a very, very specific set of attributes that happened to enable us to do this.

It actually kind of reminds me of one of my favorite books of the last few years, The Most Human Human. The book tackles the AI question in reverse. Rather than trying to understand how to make computers more like humans it wonders how to differentiate what we do as humans from what computers can already do. (The context for the whole book is that the author, Brian Christian, is getting ready to compete as a human in the Loebner Prize, the famous competition where computers compete to see who can pass the Turing Test and fool a human into thinking they’re another human.) By flipping the perspective on the question you get very different kinds of answers.

Finally, since we’re talking about the Fermi Paradox, The Atlantic had a good piece about “Why Earth’s History Appears So Miraculous” which although it doesn’t mention Fermi, basically tackles the same questions. For instance, is it a good sign or a bad sign that we haven’t already destroyed ourselves?

So now you can imagine a world where the probability per year of nuclear war is actually 50 percent. So then the first year, the first half of worlds get nuked. Then the next year half of those survivor worlds get nuked. And so on. So in this very scary scenario—still after 70 years—if you have a big enough universe or many parallel universes, you’re still going to have some observers [left over] who say ‘Hey! It looks like we’re pretty safe!’ And again they will get a very nasty surprise when the nukes start flying.