Remainders: From Fortnite to the Fermi Paradox

It’s totally crazy that May is almost done. On the book front I finished up God Bless You, Mr. Rosewater, which was excellent, and am on to How to Think by Alan Jacobs (which I’ve got a quote from in the roundup this week). As usual, if you like what you read here you can always subscribe. Oh, and a very very happy birthday to my wife, Leila. Okay, onto the links.

There were a few really amazing pieces I read this week:

This is from a few weeks ago, but I can’t resist a good piece about some gamblers who cracked horse racing in Hong Kong.

This episode of the podcast 80,000 Hours with computational neuroscientist Anders Sandberg is really fun (if you’re into talking about stuff like the Fermi Paradox). I particularly liked Sandberg’s “Aestivation Hypothesis”. Aestivation is the opposite of hibernation (sleeping during the summer instead of the winter) and the gist of the hypothesis is that maybe the reason we haven’t heard from the aliens is because they’re waiting for the stars to die out so it gets cold enough that they can efficiently run massively complex calculations that would otherwise take tons of power to cool:

So if you imagine the real advanced civilization that has seen a lot of galaxy expanded long distances, once you’ve seen a hundred elliptical galaxies and a hundred spiral galaxies, how many surprises are we going to be there? Now most of the interesting stuff your civilization is doing is going to be culture, science, philosophy, and all the other internal stuff. The external universe is nice scenery, but you’ve seen much of it. So this leads to this possibility that maybe advanced civilization is actually an estimate. They slow down, they freeze themselves, and wait until a much later era because we get so much more. It turns out that you can calculate how much more they can get. So the background radiation of the universe is declining exponentially.

As I’m sure I’ve mentioned here, David Grann is my favorite writer around. If you haven’t read his stuff it’s all amazing. Anyway, someone recommended I read his story about a “postmodern murder” which I didn’t remember ever seeing before and it’s absolutely amazing. I won’t give anything away, but go give it a read. (Despite how amazing it is, I must have read it in The Devil and Sherlock Holmes, which I highly recommend. No idea how I forgot this one …)

I was reminded of this really interesting framework for thinking about organizational change: 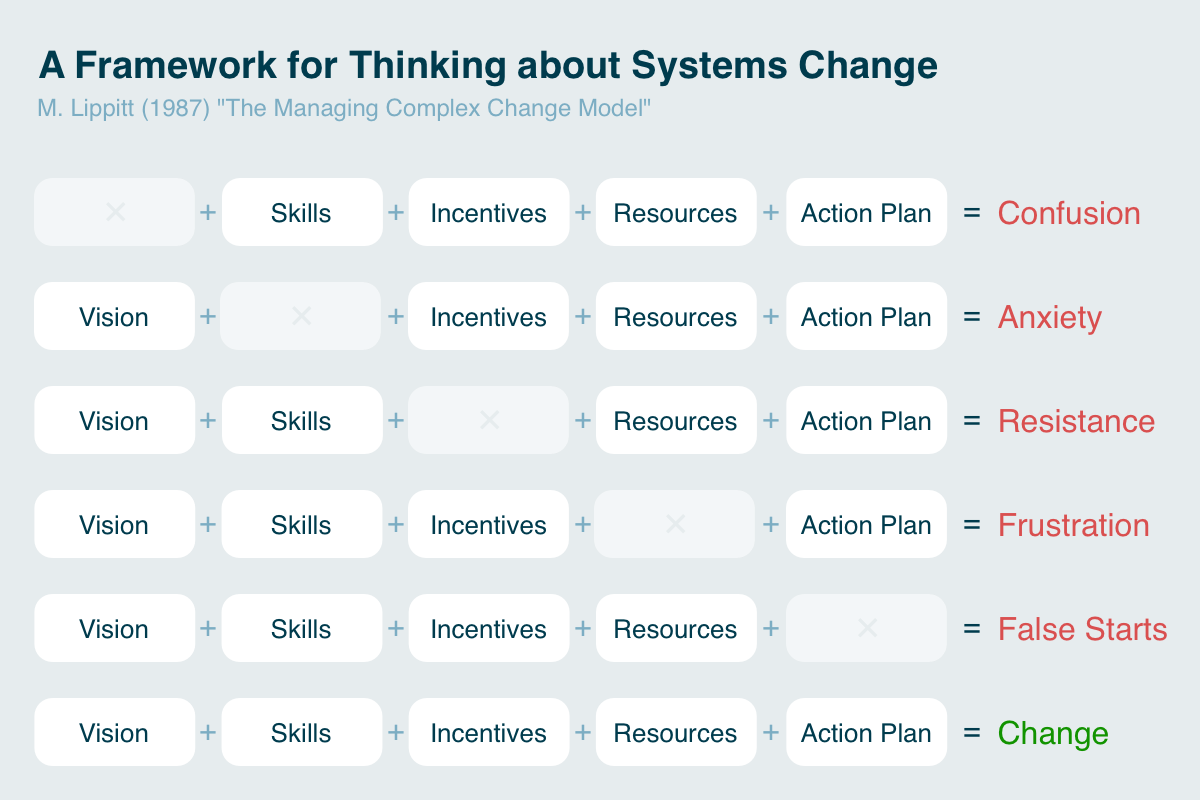 Good piece from FiveThirtyEight about how a junk statistical measure called “magnitude-based inference” came to rule sports science. This is about as snarky as I would imagine a statistician gets: “It’s basically a math trick that bears no relationship to the real world.” BURN.

Like everyone else I enjoyed the Jordan Peterson profile from the New York Times. Lobster Twitter was not happy with Mr. Peterson’s adoption of their favorite crustacean: 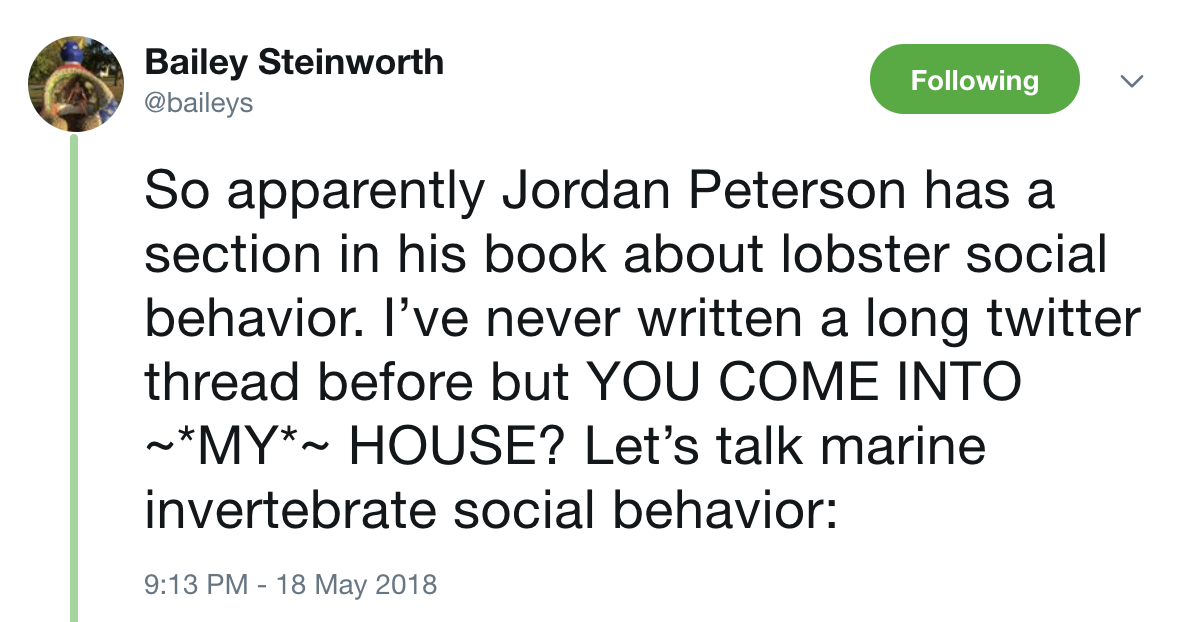 This is the coolest bubble video you’ll watch this week. (Unless you watch this one.)

Sad news: Eric McLuhan, Marshall’s son and a serious media scholar in his own right, passed away this week.

This GDPR/WHOIS situation sounds like a big mess. (But is it a snafu, a shitshow, or a clusterfuck?)

As promised, here’s an interesting snippet from the book I’m reading, How to Think on how we don’t actually “think for ourselves”:

“Ah, a wonderful account of what happens when a person stops believing what she’s told and learns to think for herself.” But here’s the really interesting and important thing: that’s not at all what happened. Megan Phelps-Roper didn’t start “thinking for herself”—she started thinking with different people. To think independently of other human beings is impossible, and if it were possible it would be undesirable. Thinking is necessarily, thoroughly, and wonderfully social. Everything you think is a response to what someone else has thought and said. And when people commend someone for “thinking for herself” they usually mean “ceasing to sound like people I dislike and starting to sound more like people I approve of.”

This David Roth piece from the Baffler on the oppressiveness of the NFL is relevant again thanks to their latest anthem antics.

Are centrists the most hostile group to democracy? Maybe. 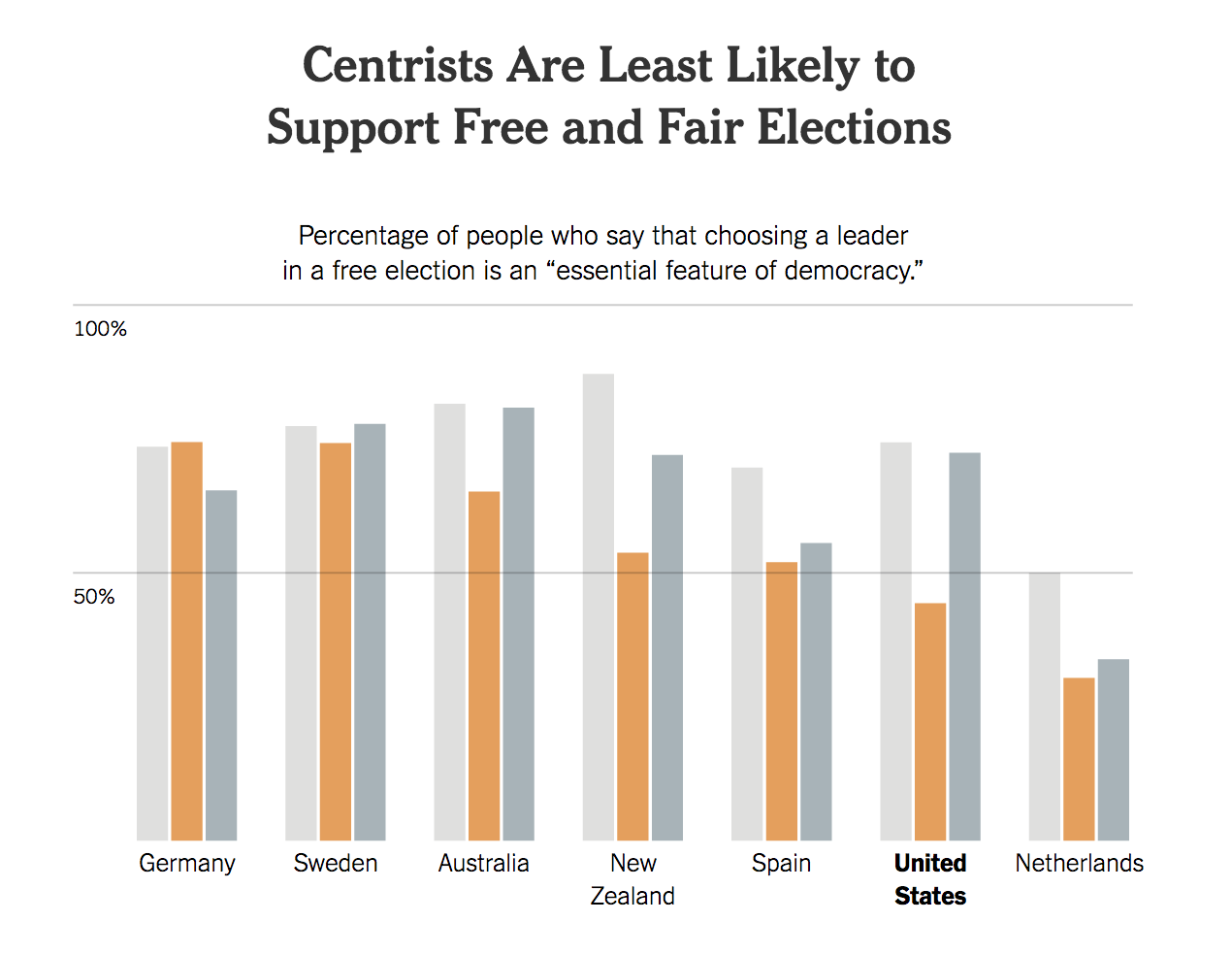 Reminds me a lot of this Current Affairs piece on the problem with bipartisanship. Here’s a snippet:

Bipartisan posturing of this kind would be absurd in a healthy democracy, even at the best of times—after all, one of the reasons we elect people is so that they can debate and disagree. If you’re not fighting with anyone, you’re not fighting for anything. But given the stated agenda of the current administration, not to mention countless other Republican-led administrations across the country, bipartisanship is perilous and counterproductive almost by definition.

That’s it for this week. Thanks for reading and have a great weekend and memorial day.