Pre-Committing and The Public Library

This being Giving Tuesday, I thought it was appropriate to write up something up about a non-profit I think is worth supporting: Your local library. As always, if you enjoy these posts please sign up for my email to not miss any posts and always feel free to share with friends. Thanks.

At the beginning of the year I decided I was going to try to read more books this year. I don’t remember it was a resolution or what, but I set a goal of thirty and set on my way, tracking everything on Goodreads (which has legitimately become one of my favorite networks over the last eleven months). This post isn’t about my book list, though (I’ll wrap that up at the end of the year), but rather about the library. Most of the books I’ve read this year have been borrowed using Libby, the app offered by Overdrive which manages e-book borrowing for most libraries (including the New York Public and Brooklyn Public, where I belong).

When I’ve told people about my library habits I’ve gotten two reactions: There’s a group who is amazed that you can borrow Kindle books and promises to immediately go out and get themselves a card and there’s another who tells me they tried it, but the borrowing just didn’t work for them. They can never find books they want, they explain, and when they do finally find a good ebook to borrow, they are always on hold. I can’t say much about not finding books you want except that I’ve managed to find lots books this year that were both well worth reading and immediately available. But that’s not the point of this post. I want to talk about book holds and how they’re better thought of as a feature of the library, not a bug. Let me explain. 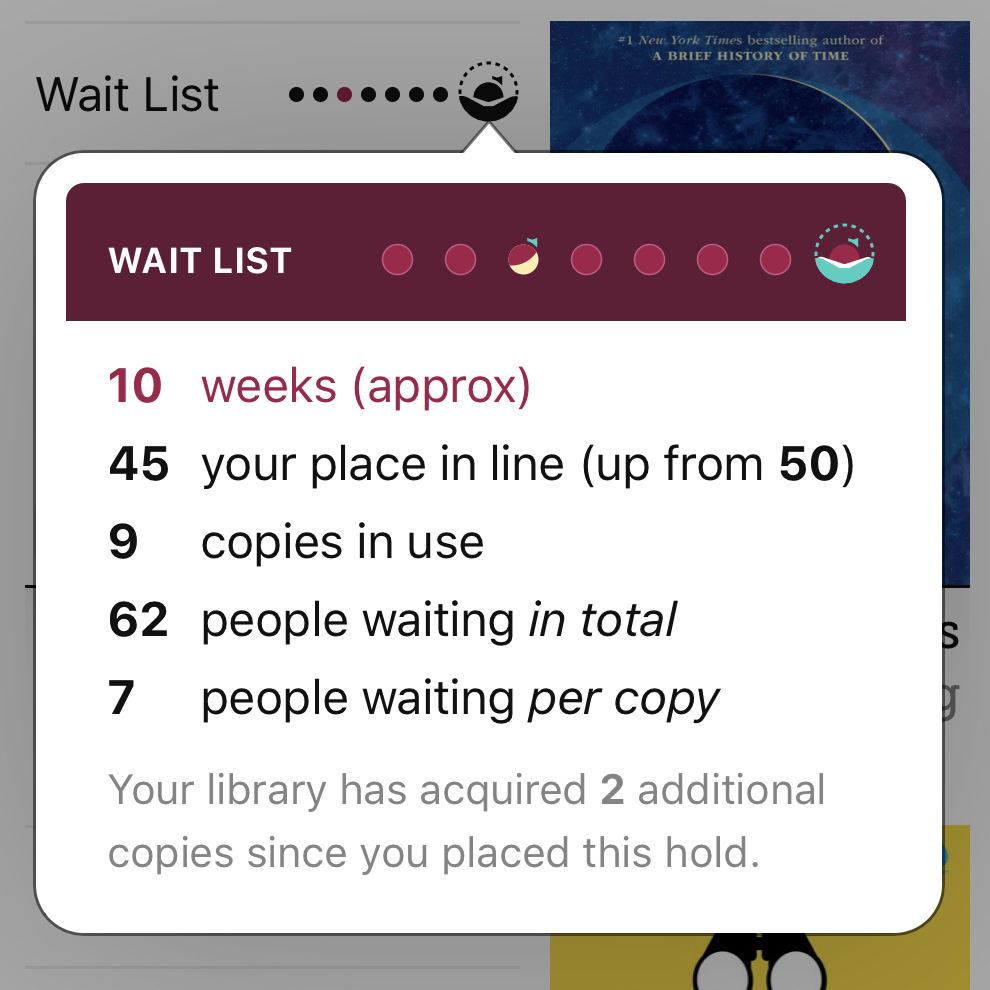 Back in 2006 I vividly remember reading about behavioral economics for the first time. I had somehow run across an article about it from Harvard Magazine and there was one bit in particular, about how pre-committing to something can help us work against our instinct to take the easy way out, that fascinated me at the time and still rattles around in my brain to this day. The basic idea, now commonly understood with the rising prominence of behavioral economics, is that humans do a very bad job of the value of things in the future. As a result, we are constantly doing things that give us pleasure in the short term and not the long term. In other words, we promise tomorrow’s self it will read that important book, watch that critically acclaimed film, or finally hit the gym while today’s self enjoys that trashy novel, watches another dumb sitcom episode, and drinks a few beers with friends instead of exercising.

But there’s a trick to dealing with our irrationality and it’s called pre-committing. The article offered up an analogy by way of Homer:

The goddess Circe informs Odysseus that his ship will pass the island of the Sirens, whose irresistible singing can lure sailors to steer toward them and onto rocks. The Sirens are a marvelous metaphor for human appetite, both in its seductions and its pitfalls. Circe advises Odysseus to prepare for temptations to come: he must order his crew to stopper their ears with wax, so they cannot hear the Sirens’ songs, but he may hear the Sirens’ beautiful voices without risk if he has his sailors lash him to a mast, and commands them to ignore his pleas for release until they have passed beyond danger. “Odysseus pre-commits himself by doing this,” Laibson explains.

Sometimes, as the analogy goes, we’ve got to bind ourselves to the mast of what’s good for us to actually make it happen. Back in 2006 my favorite example of pre-commitment was Netflix. If you can remember back to its days before life as a streaming service, you put a DVD at the bottom of your queue as you chose it and it slowly moved up the list as you watched and returned movies. The beauty of the system was that it disconnected what you wanted to watch from what you actually watched by splitting them up as two different functions (largely the result of needing to mail out DVDs). What it meant for me was that I watched a bunch of great films I’d always wanted to see because they showed up in my mailbox and I didn’t have another good choice. Instead of just watching another mindless procedural crime drama (not that there’s anything wrong with that), I finally got around to watching films from Alfred Hitchcock, Woody Allen, Orson Welles, and a bunch of other filmmakers that had been permanently relegated to deep depths of my mental movie queue.

So back to the library. If you haven’t borrowed an e-book before it works just like borrowing a physical one: The library has a set number of digital copies and if they’re all out at the moment then you get put on a waitlist. The longest you can borrow a book is 21 days and there are no renewals. That means holds often come through at inopportune times. Sometimes that means skipping the book altogether, but more often I’ve found it was just the push I needed to read something I wanted to read in the past but wouldn’t have necessarily made time for in the present.

In other words, in case you needed a reason to appreciate the public library outside the amazing civic resource it is (one branch of the New York Public Library announced they were lending ties, briefcases, and handbags to people who needed them for job interviews earlier this year), the borrowing mechanism can actually help you fight some of your more irrational tendencies.

Finally, because I can’t resist, if you appreciate the library it’s worth giving a donation if you can afford it. If you think of all the money you spend on Netflix and the like, it’s hopefully not too much of a hardship to offer your local library a few dollars a month. They’d surely appreciate it.