Marketing and the Tension Between Contrarianism and Traditionalism

I started and stopped this post four times as I tried to find the right way to open. Eventually I got tired of searching and figured it was easiest to just jump off the note I wrote to myself in Google Keep after the idea popped into my head: 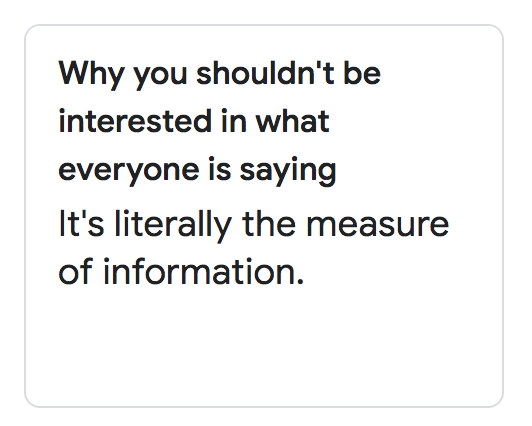 That might not make so much sense (yet), but like any good note it captured enough of the concept that I remembered what I was thinking when I wrote it. I jotted it down as I was prepping for a webinar I did last week offering up some predictions for marketing in 2019. I was getting worked up (as I’m wont to do) about how much it bugs me when everyone in marketing talks about AI as if they have any idea what it really means or the implications.1 Someone asked why it bothered me so much and my answer, which kind of just poured out, was that once everyone starts agreeing about something (and saying it endlessly) it becomes less and less meaningful. This is not just some soft definition of the word meaning, though, it literally has less information.

A few months ago I wrote about Claude Shannon and information theory. Shannon wrote a seminal paper in 1948 called “A Mathematical Theory of Communication“. In it he defined the measure of information as, effectively, its unexpectedness (he called it entropy). The more random, the more information. This is precisely what bits measure (you can think of it as the number of yes/no questions it would take to get to the answer). What happens when you compress a photo? You take away the randomness. That’s why otherwise complex surfaces like sky or skin might come to look a bit pixelated: The compression algorithm is constraining the number of hues available in order to bring down the entropy (and therefore the file size) of the whole photo.

What does that mean for marketing buzzwords?

Well, as everyone starts to say the same thing and continue to offer little behind it, it becomes more and more expected and, therefore, starts to carry less and less information. When people layer on top of those buzzwords with real examples or alternative ideas, they return some randomness (and therefore information) to the concept. At their best, marketing contrarians are attempting to breathe some life into words and ideas that have otherwise lost their information content.

I don’t really like to think of myself as a contrarian because I think that often carries with it some notion of being different for the sake of being different (and trolling). Rather, I think if everyone is following one strategy or idea, the value of being the next person to jump on board is incrementally less (especially when that idea is poorly defined/understood). In a way it’s like an anti-network effect.

What can contrarians teach us? 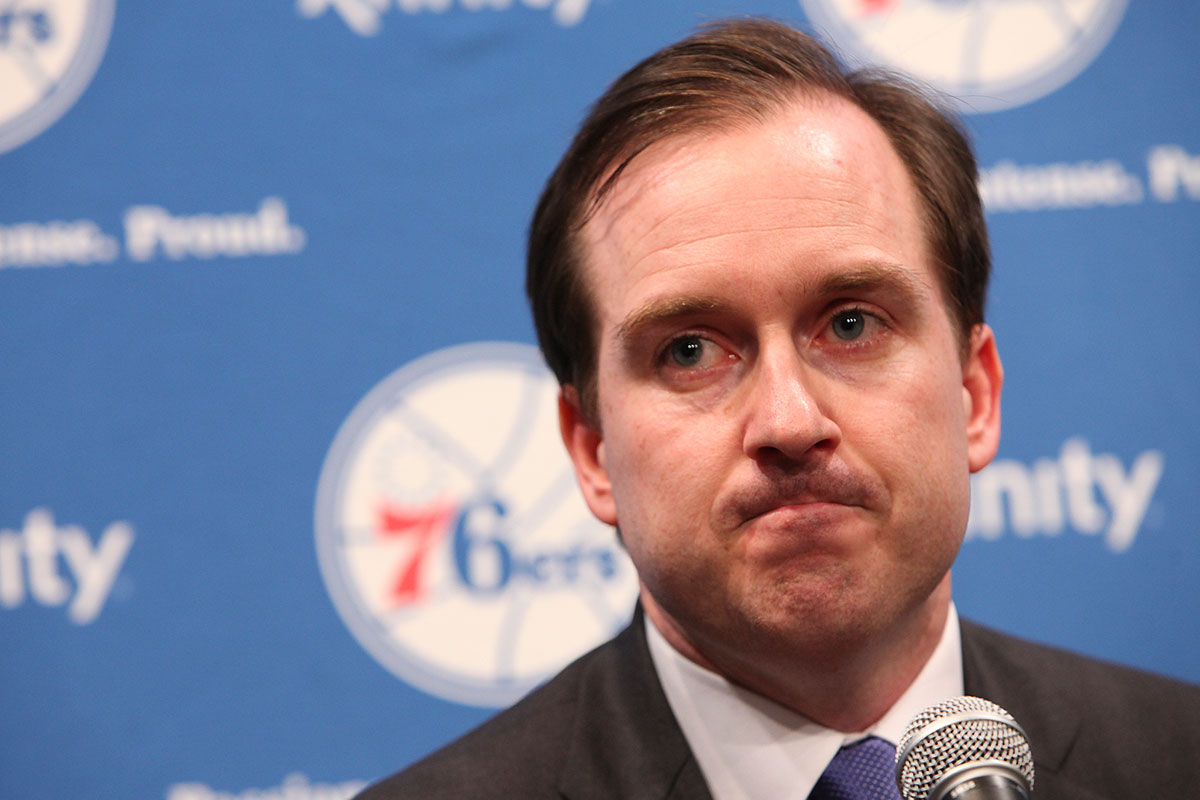 That guy with the sad face is former Philadelphia 76ers General Manager Sam Hinkie. He is a contrarian. For the uninitiated, the brief history here is that Hinkie carried out one of the most radical transformation experiments in recent sports history.2 He put aside any notion that his team was trying to win and traded everything away for more ping pong balls in the NBA’s rookie lottery. In basketball, where only five guys from a team are on the floor at any one time, a superstar can have a massive impact on a team’s success. In a 2016 episode of his podcast Revisionist History, Malcolm Gladwell called basketball a “strong link” sport because a team’s success is best predicted by the quality of its best player (as opposed to soccer where it’s based on the worst player on the field he explains). Hinkie figured this out. He also figured out the best way to get one of those superstars was to draft them and to do that you had to have an early first round pick. In the end, he took a lot of heat for his strategy (even though he was following all the rules) and was eventually pushed out by the league office (and replaced by someone whose wife kept secret Twitter accounts where she posted lots of critical comments about players on the Sixers as well as some private medical information … whoops).

Back to Hinkie’s letter. It was leaked and provided an amazing view into the psyche of someone who was willing to be a pariah. In it he paints an interesting picture of the connection between contrarianism and traditionalism.

Here he is on contrarianism:

To develop truly contrarian views will require a never-ending thirst for better, more diverse inputs. What player do you think is most undervalued? Get him for your team. What basketball axiom is most likely to be untrue? Take it on and do the opposite. What is the biggest, least valuable time sink for the organization? Stop doing it. Otherwise, it’s a big game of pitty pat, and you’re stuck just hoping for good things to happen, rather than developing a strategy for how to make them happen.

While contrarian views are absolutely necessary to truly deliver, conventional wisdom is still wise. It is generally accepted as the conventional view because it is considered the best we have. Get back on defense. Share the ball. Box out. Run the lanes. Contest a shot. These things are real and have been measured, precisely or not, by thousands of men over decades of trial and error. Hank Iba. Dean Smith. Red Auerbach. Gregg Popovich. The single best place to start is often wherever they left off.

Let’s bring it back to buzzwords.

So basically Hinkie’s argument is that the most appropriate way to be a contrarian is to also be a traditionalist: To be a respectful student of the underlying principles while also constantly probing and questioning whether they still make sense. One of the things that surprises me about the marketing industry is how often people miss this tradeoff. In an attempt to play the contrarian they shun traditional wisdom, but at the same time they repeat empty phrases and approaches at every conference that will let them on stage.

I actually think one of the reasons Byron Sharp’s book How Brands Grow has picked up as much steam as it has is because it strikes a good balance between these things. It’s a contrarian take (loyalty shouldn’t be a goal because it’s an outcome) but at the same time it’s deeply rooted in some traditional marketing ideas (marketshare, reach, and creativity to name three). This is a tough balance to strike, but when someone hits the spot is has the opportunity to really resonate.

Unfortunately, most of the time the industry misses the market by a lot. What we end up with a bunch  of anti-historical/anti-intellectual slogans that get repeated ad-infinitum. It’s lots of words and  little information.