Remainders: From Maslow to Marshmallows

I’m a little late this week, but it’s time for another edition of Remainders, my chance to share all my favorite internet ephemera from the last seven days. In case you’re new to things, here’s last week and the week before. Before diving in, update on the book front is I finished off How to Think and quickly read the Ursula Le Guin short story “The Ones Who Walk Away from Omelas” (which is around 30 pages and definitely worth the time). I flipped back and forth on what to read next, but think I’ve settled on China’s Economy: What Everyone Needs to Know by Arthur Kroeber (who I first ran into on this amazing podcast episode a few years ago about China and the book, “Arthur Kroeber vs. The Conventional Wisdom“). As always, if you want to get these in posts in your inbox you can subscribe by email. Okay, now for some links.

My talk from Percolate’s Transition Conference in SF is online now. It’s all about applying the theory of constraints from the book The Goal to marketing’s bottlenecks. We’re putting on Transition London in two weeks. If you’re interested in joining us there, please get in touch.

One more thing from me: I was interviewed on Paul McEnany’s excellent Real Famous podcast (iTunes, PocketCasts, Stitcher). I can’t listen to my own voice for that long, but people have told me they enjoy it.

It was a great week for longform. Here are my four favorite pieces:

You know Maslow’s Pyramid? Of course you do. Well, it turns out that the pyramid didn’t come from him at all and, in fact, it disagrees with a lot of what his theory had to say. This comes from a new paper “Who Built Maslow’s Pyramid? A History of the Creation of Management Studies’ Most Famous Symbol and Its Implications for Management Education” which Ed Batista highlighted on Twitter. Here’s quote from the paper:

We identity three specific negative effects in this regard: that the pyramid is a poor representation of Maslow’s [hierarchy of needs]; that the preoccupation with the pyramid obscures the context within which the theory was created and that by focusing exclusively on the pyramid, we miss the other contributions that Maslow’s thinking can make to management studies.

The paper’s authors even put together this handy video explainer.

Steve Kerr is back in the NBA Finals coaching the Golden State Warriors. Last week he had some strong comments about the NFL’s anthem decision. If you’re curious, the Times had a good profile of Kerr last year that tells the story of the assassination of his father in Beirut in the 1980s.

I ordered a copy of the Toyota Production System, which includes this great inside cover timeline: 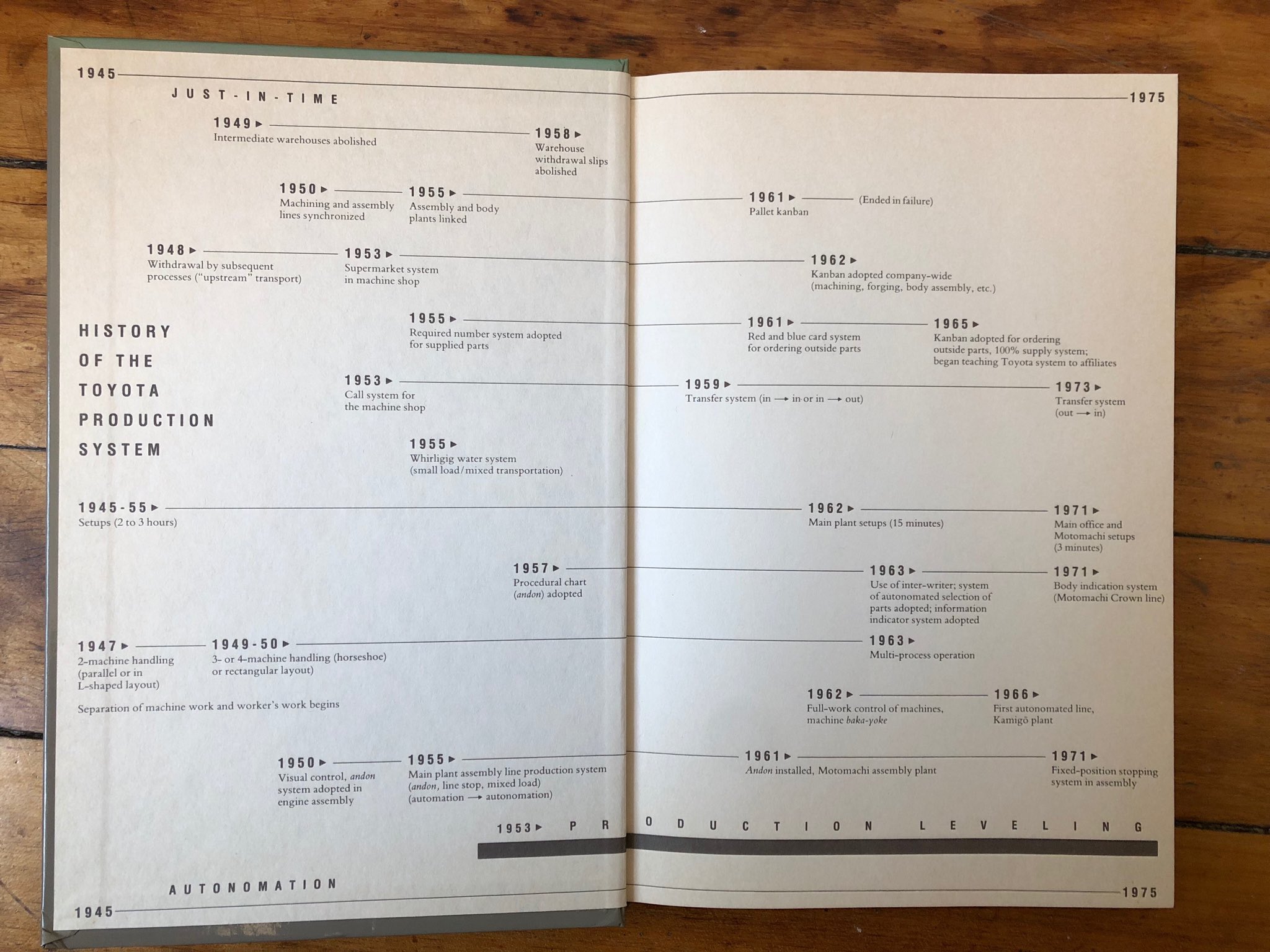 Speaking of books, here’s every book Bill Gates has recommended over the last six years.

Twitter pointed out this photo of Rocket’s star James Harden looks like a scene from a renaissance painting and, of course, there’s a subreddit called AccidentalRenaissance. 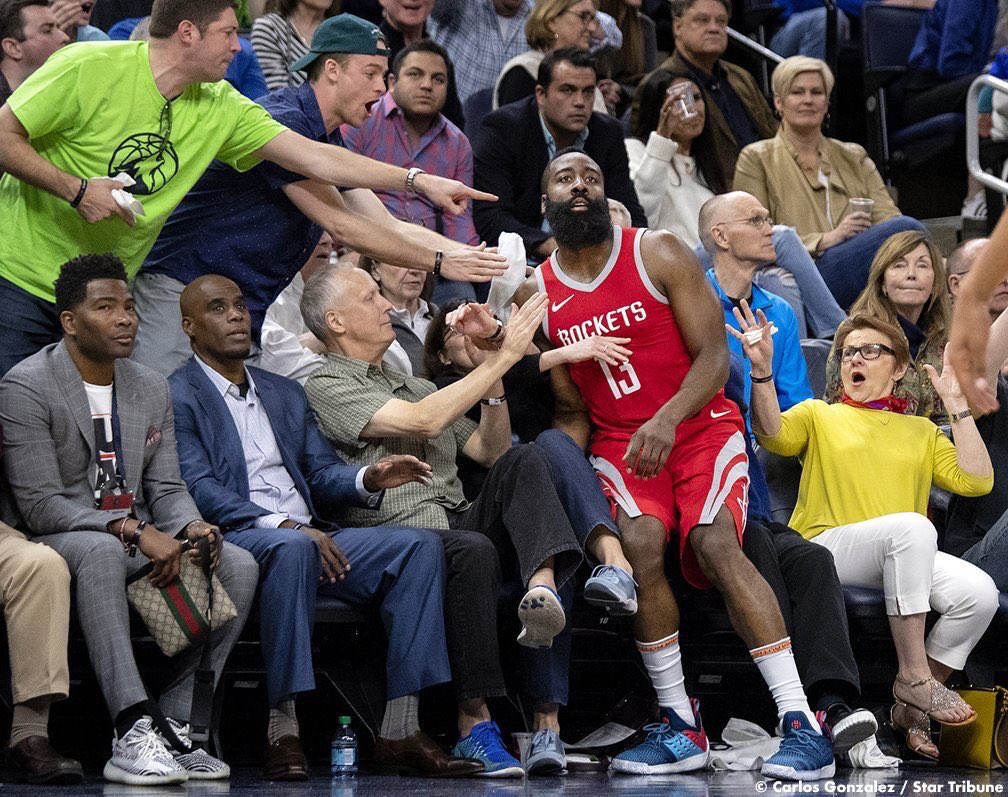 The New York Times had a good op-ed on how segregation worked in the North. And here’s Jelani Cobb on “Starbucks and the Issue of White Space“.

Would you go to a republican doctor?

Some good stuff in this New Yorker book review of The Big Picture: The Fight for the Future of Movies (the author, Ben Fritz, was also on an excellent episode of Slate Money a few weeks ago), a book about the history and current state of the movie industry. This bit about the size of the rental market really surprised me:

Suddenly, there were video stores all over America that needed to purchase at least one copy of every major new Hollywood movie. In “Powerhouse: The Untold Story of Hollywood’s Creative Artists Agency” (Custom House), an oral history compiled by James Andrew Miller, Tom Hanks recalls the effect that this had on Hollywood in the eighties. “The industry used to be so flush with free money that it was almost impossible to do wrong even with a crappy movie, because here’s why: home video,” he says. By 1986, video sales and rentals were taking in more than four billion dollars. Income from home viewing had surpassed that of theatrical release.

TILs from this week:

My friend Tim Hwang launched the Trade Journal Cooperative, wherein you pay $60 a year to get random niche trade journals sent to you. I couldn’t be more in.

I was reminded of this great piece about Suck.com and its unique style of hyperlinking.

Mary Meeker presented her yearly state of the internet with lots of data.

From the China book I’m reading, thought this was an interesting nugget:

These are summed up in a motto frequently cited by one of China’s leading economists, Justin Lin, who attributes it to Premier Wen Jiabao: “When you multiply any problem by China’s population, it is a very big problem. But when you divide it by China’s population, it becomes very small.” The point is simple, though easy to miss: China’s size means that any challenge it faces—unemployment, environmental degradation, social unrest, you name it—exists on an almost unimaginably large scale. But it also means that the resources available to tackle the problem are gigantic. The difficulty lies in marshaling all those resources and deploying them effectively.

This question/answer from NYTimes/Gladwell about the kinds of stories that fascinate him fascinated me:

Are there certain ideas that you find yourself drawn to again and again? For example, you’ve used the threshold model of collective behavior to explain both school shootings and why basketball players don’t shoot free throws underhand. I like ideas that absolve people of blame. That’s the most consistent theme in all of my work. I don’t like blaming people’s nature or behavior for things. I like blaming systems and structures and environments for things.

On the subject on blaming systems not people, it looks like the famous marshmallow experiment missed the systemic nature of what allows certain kids to be better at delaying gratification:

Ultimately, the new study finds limited support for the idea that being able to delay gratification leads to better outcomes. Instead, it suggests that the capacity to hold out for a second marshmallow is shaped in large part by a child’s social and economic background—and, in turn, that that background, not the ability to delay gratification, is what’s behind kids’ long-term success.

Finally, after failing to get a recommendation from Consumer Reports because of braking issues, Tesla was able to push out a software update that improved stopping significantly enough that CR upgraded to a recommend. Perfect example of how software is eating the world.

Ok, that’s it for this week. Thanks for bearing with me while I tried to get this out. If there’s anything I should definitely check out that I didn’t mention, please send it my way. Otherwise please share this with your friends and, if you haven’t already, subscribe to the email. Thanks and have a great week.