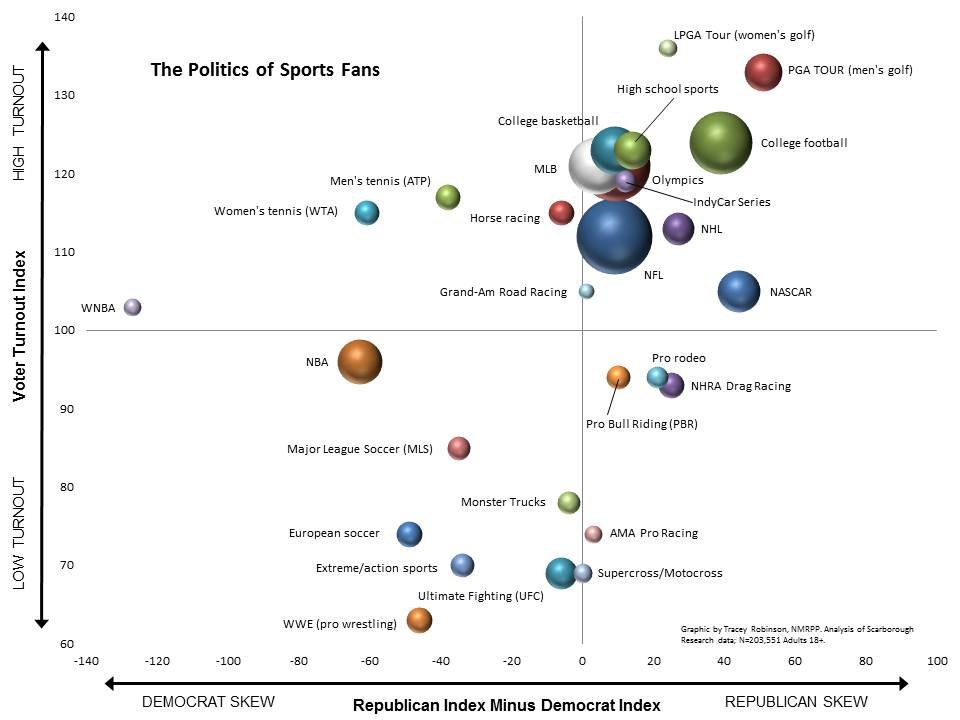 Source: Your Politics Are Indicative Of Which Sports You Like, Business Insider

On July 1, 2016 DeMar DeRozan signed a 5-year contract with the NBA’s Toronto Raptors for somewhere in the range of $145 million. Last week he was traded for Kawhi Leonard, the NBA’s best perimeter defender and one of the five best players in the league when he’s healthy (which he wasn’t all of last year).

DeRozan was pretty upset about it. He may or may not have been told he wouldn’t be traded and, either way, it seems clear he wanted to stay in Toronto. They drafted him when he was 20 years old and he had hopes of retiring with the team, ideally becoming the greatest Raptor in franchise history (a feat made easier by the fact that nearly every great Raptor has escaped Toronto at the first opportunity).

So far this is all just NBA news you either don’t care about or already know. So why write about it? Because I can’t deal with the “this guy shouldn’t complain, he is making almost $30 million a year” conversation. Of course there were variations, but the gist is that because you’re an athlete and you (deservedly) get paid lots of money you a) shouldn’t have, or b) shouldn’t voice, regular human feelings (this is, in case you haven’t noticed, a stance also shared by our president).

Since I read Alan Jacob’s book How to Think, I’ve had his answer to this question (or a version of it at least) rattling around in my head:

But that’s because Gladwell [in his Revisionist History podcast episode asking why Wilt Chamberlain didn’t shoot underhand free throws], like many of us, seems to have unwittingly internalized the idea that when professional athletes do the thing they’re paid to do, they’re not acting according to the workaday necessity (like the rest of us) but rather are expressing with grace and energy their inmost competitive instincts, and doing so in a way that gives them delight. We need to believe that because much of our delight in watching them derives from our belief in their delight. (In much the same way we enjoy watching the flight of birds, especially big birds of prey, associating such flying with freedom even though birds actually fly from necessity: they need to eat. And yet we have no interest in watching members of our own species drive to McDonald’s.)

That’s nearly perfectly expressed. We need to believe in their delight because of our delight and we can’t stand to think we care more about winning or losing than they do. Or, as my friend Jeff at DaBearsBlog put it, “fans think it should be honor to play pro sports because they all wish they could.” The thing here is it’s still just a job. If we zoom ourselves out for a minute and replace athlete with employee and professional sports league with desk job, we start to see things more clearly. If you hold a senior role at a company there are many in the organization who feel the same way about you as you feel about athletes: That you have it easy and if they could just be in your position everything would be right in the world. Of course you don’t and it wouldn’t.

What’s more, while some of us may have found a way to practice our passion at work (I feel pretty lucky in that regard much of the time), it’s only natural to have moments where we don’t feel like doing the things required of us or can’t find the excitement we know is there somewhere. It’s a normal part of doing the same thing everyday, which is what it means to be a professional at anything. (An interesting analog is the surprising number of startup founders I’ve met who are completely clinical about the industry in which they start their companies. They don’t need to care about the space as long as it offers the right market conditions.)

Getting back to the start, there are two main things people say about professional athletes that get under my skin: They’re rich so they should get over it and they should have known when they signed a contract. Let’s take these one at a time.

They’re rich so they should get over. While it’s true they make an unbelievable amount of money, that can create a whole new set of things to deal with that many of us can’t imagine. There’s lots of documentation that suggests after a certain point money stops making you happier. What’s more, they surely will eventually get over it, but sometimes that takes some time (try to remember back to how effective it was when someone told you “you’d get over it” after what felt like a momentous breakup). DeMarcus Cousins, a superstar NBA player who has earned around $80 million in his career but was forced to take a low-money short-term contract this season after getting hurt put this perfectly recently. When asked whether he was nervous through the free agency process, Cousins answered, “Have you ever been unemployed? Were you nervous then? Alright, that answers the question.”

They should have known when then they signed a contract. Here, again, it’s easy to turn back to all of our regular job experience. Most of us in America are at-will employees, meaning we can be fired at any time for essentially any reason. Despite the fact that we all sign an at-will employment agreement, people are frequently shocked when they’re fired, whether there is good reason or not. Do we wonder why they’re so surprised? Of course not. Sure DeRozan wasn’t fired, but he can still be surprised and sad and frustrated that it happened.

Last, but not least, there’s a much bigger story here about professional sports, money, power, and race. The NBA is a very progressive league, but even there you can’t get away from fan loyalty sitting with teams instead of players. And I’m not advocating it should, that’s the fun of watching sports: You live and die with your squad (there’s a famous Seinfeld joke about rooting for laundry). However, we can enjoy the game and our teams while not questioning the humanity of the athletes who make the whole thing possible. The NBA has made huge strides in becoming a player-centric league, but fan conversations are still lagging behind.